I. Overview of Mau Due and the current status of water use in daily life

Before 2010, Mau Due was one of the poor communes with difficult economic conditions. From 2011 to 2015, Mau Due commune was selected by Yen Minh district as one of four new rural construction sites. Although there is not much investment, the commune has well mobilized socialization resources to continue to improve the infrastructure and step by step to build the countryside more and more innovative, spacious, clean and beautiful. People’s lives are improved both materially and spiritually along with the efforts of the Party Committees and authorities in the district and commune. At the beginning of 2016, Mau Due commune was recognized as meeting the standards of rural areas for the period 2011 – 2015 and was one of the first 11 communes of the province to complete the construction of new rural areas. This is a great joy for officials and people of Mau Due commune in particular and Yen Minh district in general. From 2015 up to now, the face of the countryside in Mau Due has really changed after being implemented and recognized as meeting the new rural standards: 100% of commune roads and commune center roads, and over 98% of the main roads of villages and hamlets and 70% of alleyways have been concreted. Nearly 94% of households have access to electricity from the national grid, and schools’ facilities and teaching equipment also meet national standards.

2. Current status and demand for clean water of the people in Mau Due

However, with the harsh conditions of nature in the mountainous communes of Ha Giang, the shortage of daily-life water is always present throughout the Dong Van  and Meo Vac highlands, where only rocks and stones can be seen, including Mau Due. Due to the limited water resources in the rocky plateau, more than 90% of the people in the mountainous highlands in the north of Ha Giang province lack water for daily life, especially in the dry season. This is a challenge for the people of Mau Due commune, the lack of water for domestic use and production is a difficult problem. To overcome this, Ha Giang province has really tried in solving domestic water problems. There are evidence that the province has supported families to build water storage tanks. Despite receiving the attention of local authorities, many Mau Due residents still cannot have a clean water treatment system due to difficult economic conditions. According to statistics, the average annual income of households in Mau Due is less than 30 million VND (~1,300 USD), the poverty rate in the commune is 10%, the near-poor rate is nearly 15%. The percentage of households using clean water meeting national standards is still too small. According to information collected in Mau Due commune, Yen Minh district, currently only 30% of households have access to clean water of national standards, while the remaining 25% of households use concentrated water through a self-flowing system, and more than 40% of households still have to use water from dug wells, crevices, springs or troughs. 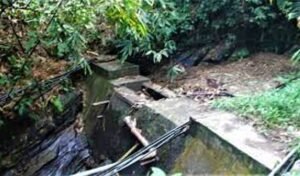 Photo. The slit water source exploited by people in Mau Due and used as domestic water.

Like people in other mountainous rural areas, the percentage of households in Mau Due commune has access to clean water according to the technical regulations of the Vietnam Government is very limited (31%) due to having to use a lot of water from dug wells, springs, and self-flowing systems. 69% of their population still do not have access to clean water, of which 46.6% use untreated water from dug wells, crevices and streams and 22.3% use raw treated water from natural water purification systems or concentrated flow. Whenever it rains and floods, water supply pipes as well as sanitation works are destroyed, self-flowing water purification systems, household-scale raw water filtration systems as well as dug wells, crevices, streams are often flooded, leading to serious contamination of drinking water. This situation takes a long time to overcome, local people have to use unsanitary water for daily life. The use of unsanitary water has put poor people earning less than $2.0 USD/day at risk of gastrointestinal, respiratory, eye and skin diseases. Meanwhile, providing emergency clean water to people in flood conditions is extremely difficult, expensive, and even dangerous to the lives of rescuers.

Currently, rural and mountainous people in general and Mau Due in particular use two models of water filtration, which are the traditional home water filtration system and the water filtration system. concentrated self-flow. With traditional home water filtration systems (slow filtration through sand and gravel), the cost of a system including labor and filter media is estimated at $350. This model, the advantage of low operating cost, is easy to use. However, the disadvantage is that the water quality does not meet QCVN 02.2009-BYT[1][2] and does not count the capacity. The second model is invested by the provincial or national budget, with an initial investment of about 20,000 to 35,000 USD, providing domestic water for about 200 to 1000 people, including labor and construction materials. and water supply pipes. The price of water that people have to pay is about 2.2 USD for 1 cubic meter of water. However, the water quality also does not meet QCVN 02.2009-BYT, the pipeline is easily damaged due to floods, landslides. Thus, both models are susceptible to damage from floods and landslides. Therefore, the people of Mau Due commune want a suitable model that meets the quality, efficiency and convenience so that rural and mountainous people can use clean water equally as in urban areas.

About Local Work Project: Vietnam Local Activities for Environmental Health, implemented by PHAD Institute funded by USAID since 2017 with many objectives which include activities to increase access to clean water for local people; building clean water treatment systems meeting QCVN 6-1:2010/BYT, Monitoring and evaluating the sustainability of the model.

From the initial success of the source water treatment system, combining lessons learned and adaptation, the research team has improved and proposed a clean water supply system that adapts to climate change for people in rural mountainous provinces of Vietnam, where there are floods. The system is designed based on the principle of combining biological and physical technology, including 3 filter columns: column No. 1 is a self-flowing sprinkler system; Microbiological filter, 1 layer of yellow sand, 1 layer of quartz, 2 layers of gravel, has the function of removing iron, oxidizing organic matter, preventing particles with a size of about 0.5 micrometers, killing microorganisms. pathogenic organisms; Anaerobic reverse filter, including 5 filter layers, including activated carbon layer and 4 layers like filter number 1, with the function of removing heavy metals, deodorizing, detoxifying and killing aerobic bacteria cause disease. In this column, it is possible to add special filter materials when the water source is high in temperature or salty. 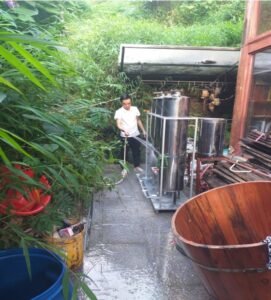 The clean water supply system is climate resistant with an initial cost of 280 USD, much cheaper than previous systems, and the water quality meets QCVN 02/2009-BYT, the households do not have to pay for water. easy to use, easy to use, most filter materials are available, except anionis material, easy to move during floods and landslides, specifically

However, filter media may be required, especially when the water source has a high content of calcium and magnesium cations. Therefore, an anion resin filter layer must be added, which requires operating costs to ensure the quality of filtered water meets QCVN 02/2009-BYT. To ensure sustainability, users need knowledge, good practices, and adherence to system maintenance procedures.

With the construction of a new clean water treatment system, ethnic minorities in Mau Due commune will always have clean water to use even during floods, and people’s health and livelihoods will be improved.